I’m writing this post as a response to a strange comment received recently, but more than that, this can be an ‘eye opener’ post if you fall in same category. Do you believe in website stats and figures which are calculated by third party web companies? do you think it is accurate?. Here, I’m sharing the connectivity between Alexa Vs Google Analytics Vs Earnings of a website or blog.

with the help of alexa rank anyone who have some mind can guess approximate adsense income.

so stop proclaiming these non-sense reports.
your sysprobs.com is tech related site so very less chances to get click , because most of the visitors are tech savvy. cpm is not that much for tech sites, according to your site alexa rank your monthly pageviews is not over 500,000 permonth, and most visitors are from india and neighbour countries.

Even though I get more good and positive comments, but few of these comments also come to my inbox. That was the main reason I shared my last moth earning report with screenshots of each programs.

How others can guess and calculate my blog’s earning and actual traffic from Alexa?

I know most of the new bloggers waste time on third party website calculators and go after behind it, because I also did the same mistake. Alexa could be an important factor to consider, but that is not very accurate. Almost one year ago I shared my comparison with Alexa and exact traffic, you can check it here.

If you are addicted to check your and others’ blog traffic, rank or value on third party websites including Alexa, I suggest to STOP DOING IT. It will never give correct information on others’ websites.

I can explain further on these stats by comparing my both blogs with correct Google analytics and income reports.

So, what you would guess immediately on actual earning and traffic by seeing above Alexa rank?

DailyBlogMoney is having better Alexa rank in India and Global rank is just 1.5 higher than Sysprobs.

So, can we finalize that DailyBlogMoney earning and traffic should be at least half of  Sysprobs?

DailyBlogMoney’s traffic is only about 1.3% of Sysprobs traffic (by comparing PV).

But, Alexa doesn’t reflect that much difference in the global rank, and surprisingly Indian Alexa rank in better for DailyBlogMoney than Syprobs.

Here is the another Alexa factor to decide traffic, which is ‘Reach’.

‘Reach’ means how many percentage of global internet users visited a particular web site in last 7 days, 1 and 3 months.

Alexa reports for Sysprobs as below, 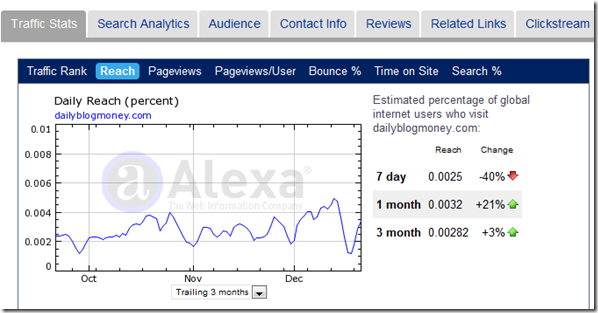 But, was it correct compared to actual Google analytics report? When Alexa ‘reach’ factor reports about 50% traffic, but the real traffic is only around 1.3%, which is a big difference.

DailyBlogMoney did not earn considerable amount. Recently I removed the main adsense slot from DMB which struggled to make even 10$ per month. The adsense slot after each post is not doing anything and the same applies to other affiliate banners.

So, my blog income is mainly from Sysprobs. I can say that DBM contributed around 1% in my last three months earning. But still that doesn’t translate Global Alexa ranks difference.

The below example is even worse,

When I was new to blogging, I keep on checking website traffic and daily earning at http://www.websiteoutlook.com/.

Here are the stats now,

OK, this is quite reasonable.  The daily pageview and Revenue are slightly around what I get from Sysprobs.

Check the below stat for DailyBlogMoney from same websiteoutlook calculator.

The strange commenter said that Sysprobs’s top traffic country is India. Is it true?, I can’t blame the commenter, because Alexa reports the same as below, 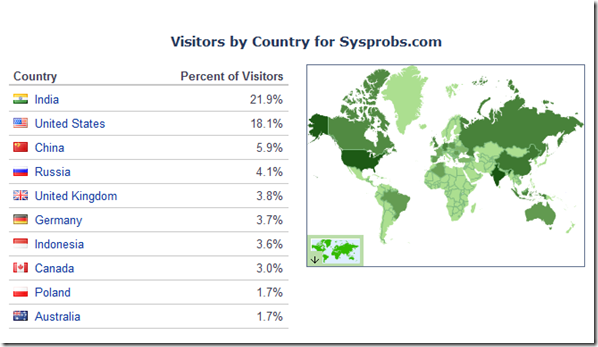 So, he was correct that I can’t earn that much money if my site’s top traffic country is India and neighbor countries.

But, see the below screenshot taken from Google analytic for last three months. 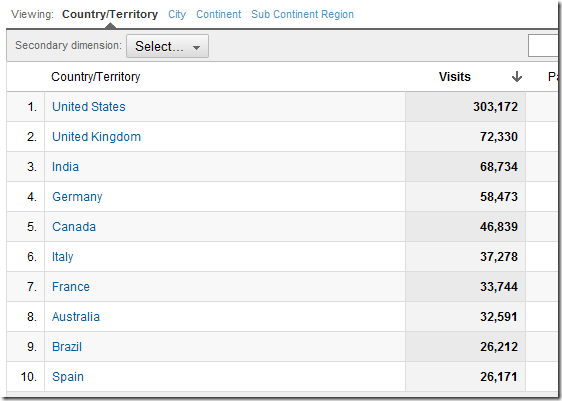 It clearly says United States is getting almost 5 times more traffic than India whereas Alexa reported India as the top country.

Conclusion and What I’m Trying to Say?

There are more genuine and great bloggers around my blog, they leave useful and valuable comments, thanks to them.

This post would be an example of misleading website calculators and rank system. Do not limit your self by checking these ranks and stats for your website and others’ too. Instead, try to publish more and more quality articles, promote your blog and get more traffic.

I can validate your Blog/Business Idea for Free

Thinking to start a new blog or online business? Fill the form below, Let’s discuss.