I decided to share the figures of March 2012 blog income even though I decided to not to publish earlier. There is a special reason for it, and if you are following me and my blog for some times, I apologize for one month gap without publishing new posts or replying your comments.

You know what is special on March month?, I’m completing two years of (serious) blogging, I mean, back in 2010 March I started blogging seriously to make money. I was on desperate need of additional money and I know making money from internet is possible, but I was not serious or concentrated on it. So, I stared blogging on March 2010 with so many plans and blog posts and my first month earning was 33.59$ by adsense only (See below screenshot).

Therefore I have decided to publish my income figures exactly after two years to compare the growth and you to realize the possibilities on internet. Remember! I’m still a part time blogger. If you see how my earning is increased in last two years by hardworking,planning, consistent and confident, I’m sure you can take few messages from this post to motivate your self in blogging.

No matter what happens, I’m happy with the way the two years have passed. Most of the bloggers and blogs had tough time with so many algorithm changes. Though, my several articles got affected but not the entire blog. The money $1979.75 is big value for me and my life.

Here is the breakdown, 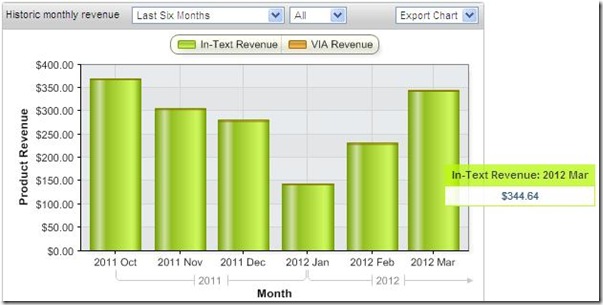 Things I Wanted to Say

March was the end of Q1 of 2012 which affected the earnings in good way. I could see the good improvement in Contextweb CPM and Vibrant media ad networks.

Amazon associate also worked well this time by a large amount of sale.

I joined this program recently. They make Windows OS cleaning and registry fixing utilities. I can’t comment more about them because I have not completed even full one month with them. Still its a cool program to increase the income. Lets see how it works in April.

These all happened within two years only, I’m a part time blogger (who is having busy full time job) and a family man. If you are a bachelor and not having full time job, but trying to make money from online, then you can make more money than me in two years. All you have to do is blog properly, write valuable and unique articles, do proper SEO (do not try short-cuts), treat your blog like a real world business, plan properly and be patient.

I hope this report would give some boost on your blogging activities and future.